EdNeuroLab Zeroes in on Math Learning

In 2012, Edward Hubbard, a cognitive neuroscientist and assistant professor in UW‒Madison’s Department of Educational Psychology, created the Educational Neuroscience Lab to understand—through functional magnetic resonance imaging (fMRI)—how the physical changes that occur in children’s brains as they learn may help improve education practices.

“We use the same type of MRI scanner you’d find at a hospital, but it’s tuned a little differently,” explains Hubbard, also a principal investigator at the Wisconsin Center for Education Research who directs a 40-member team at the EdNeuroLab whose work revolves around numerical cognition, synesthesia and autism spectrum disorders. “This special scanner picks up blood flow signals in the brain—and by knowing where the blood is going, we can tell which parts of the brain are active when kids do different things, like reading words or computing math problems.”

Fractions, in particular, have been a special interest. “We know that fractions are hard and it’s a hurdle that many children struggle to get over,” says Hubbard. “However, research shows that fifth graders who understand fractions go on to do better in algebra, which is the gateway to higher math skills critical to success in the STEM workforce.”

From the early days of the EdNeuroLab, Hubbard has been collaborating with Percival Matthews, an associate professor of educational psychology in UW–Madison’s School of Education and director of the MELD (Mathematics Education Learning & Development) Lab. With a mutual professional interest in improving fraction learning, the researchers joined forces on a five-year study called LAMBDA (Longitudinal Analysis of Mathematical Brain Development and Abilities), funded by a $1.9M grant from the National Institutes of Health.

LAMBDA has been exploring a number of questions about fractions, such as: Why are they so hard to learn? What brain systems support fraction learning? And how do these systems develop in schoolchildren? 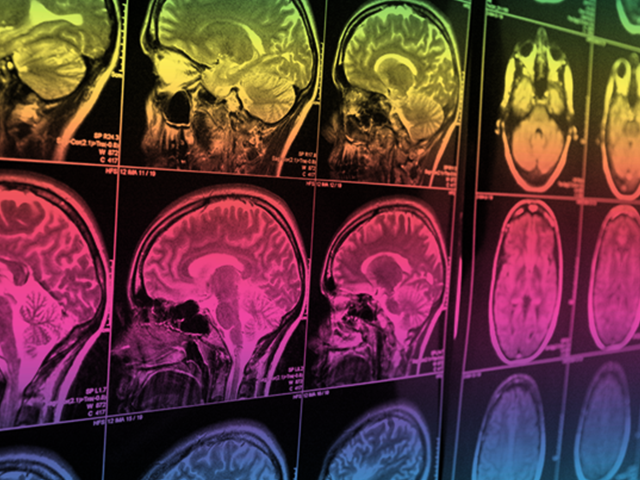 Hubbard and Matthews have also collaborated with researchers and educators outside of UW‒Madison on the LAMBDA study, including Jake McMullen, a well-known scientist from the University of Turku in Finland. While other education researchers are doing work on fractions, Hubbard says nobody is exploring this intersection of fractions and educational neuroscience.

This one-of-a-kind longitudinal study, which wraps up next year, has been following 400 children for four years from the Madison Metropolitan School District, Middleton-Cross Plains, Verona, Waunakee and Monona Grove who enrolled in LAMBDA in second and fifth grades. For a fractional time commitment of only five hours a year, students participate in behavioral sessions and fMRI scans at the Waisman Center.

“While some students have moved away, about 80 percent remain in the study,” Hubbard says of the participation rate. Others have also dropped out due to orthodontic treatment, as metal braces and MRI magnetic fields don’t mix. “The hard part is getting them to stay still while they are in the scanner,” adds Hubbard.

For their contribution to the study, students receive $50 for the MRI scan and $10/hour for the behavioral sessions.

So why have parents enrolled their children in the LAMBDA study? Ana Stephens, whose son joined the LAMBDA study at age 10 and is now in his final year as an 8th-grader, explains: “I hope that my decision to enroll Brady in the study contributes, eventually, to improving educational outcomes for students.”

Stephens is a WCER researcher whose own work also centers on mathematical thinking. “I have no experience in neuroscience, but it is interesting to see how parts of the brain are activated when engaged in different tasks and what eventual implications that might have for how we teach and how students learn.”

As for Brady, he says, “Having my brain scanned sounded cool and I also liked being paid to participate.” He looks forward to seeing the results of the study and while he would like a picture of his brain, Brady can no longer participate in MRI scans because he has a permanent retainer on his teeth.

Hubbard explains that even when students have to pull out of the study because they get braces or retainers, or move out of the area, it will not hinder the research. “We have a lot of analytical tools that allow us to fill in the missing data.”

“Through fMRI, we think we have identified a brain system that might be really important for learning about fractions in ways that other education researchers and cognitive neuroscientists haven’t appreciated, which is ratio perception,” Hubbard shares some LAMBDA insights.

With brain imaging, the EdNeuroLab team has been able to show on scans that in the right side of children’s brains, before any formal instruction with fractions, second-graders already can understand basic, non-symbolic ratios, such as dot patterns and line lengths. The researchers have observed through fMRI that the same brain systems are activated when students in 5th and 8th grades, and even adults, are computing symbolic fractions.

“It suggests that we are on the right track,” says Hubbard. “Kids are learning fractions by taking these pre-existing brain systems and through educational experiences, retooling them to do this uniquely human thing of comparing symbolic fractions.”

While much research over the years has shown that education has a powerful effect on our brains, Hubbard is astounded that we know relatively little about how our educational experience is shaping our brain. “Here we are in the 21st Century running the largest uncontrolled experiment on brain development in the history of humanity. We start children learning at age two all the way through college. And we basically have no idea what we are doing to those brains,” says the EdNeuroLab director.

Through the LAMBDA study, Hubbard and Matthews are literally illustrating the far-reaching implications of why becoming competent in fraction learning is important to the future of education, especially in the STEM fields.

But there is another equally powerful reason why being good at math is crucial for the development of children.

“Ample evidence shows that math is more important than reading, although literacy is commonly thought to be king, and that individual differences in math skills are a better predictor of life outcomes,” adds Hubbard, referencing a longitudinal study from the United Kingdom that followed children into adulthood.

“Children who did well on their A-level math exams, independent of their reading skills, later had higher levels of full-time employment and income, and lower rates of substance abuse and depression by age 30.”

Initial findings from LAMBDA are being released now. Behavioral data and the first fMRI results are currently under review.