Guery Ulunque has come a long way since he first landed in the United States from Bolivia with his father and sister in 2008. The now-18-year-old senior at Yorktown High School in Arlington, Va., recalls his struggles.

“The hardest thing was adjusting to the language,” says Ulunque, who remembers that he was teased by other kids because he didn’t speak English. It took him three years to learn, but the determined and very resourceful immigrant eventually became bilingual. “I learned to speak English by watching ‘SpongeBob’ and ‘Dora the Explorer’ on TV, and listening to American music.”

During his early years in the U.S., Ulunque could not have imagined taking the stage and confidently speaking—in English—to hundreds of educators and students from across the country. Yet, just last year, Yorktown High School social studies teacher Anne Stewart selected Ulunque and two Latino classmates to present at the spring conference of the Minority Student Achievement Network (MSAN). They shared their experiences in the school’s first-of-its-kind program for minority boys, inspired by Stewart’s participation in MSAN.

“It felt really great to represent my school, my Latino community and Hispanic culture. And my dad was really proud of me, too,” remembers Ulunque.

Participating in his school’s MSAN program motivated Ulunque to improve his grades and reach out to other struggling students. “MSAN was there for me from the beginning and I want to be there for them,” he says. “It has helped me be a better person.”

MSAN is a national coalition of suburban-urban school districts that work together to narrow racial opportunity and achievement gaps that persist in their schools. Launched in 1999, it is a project of the Wisconsin Center for Education Research within UW Madison’s School of Education. In addition to engaging in collaborative research, it hosts three well-attended conferences every year: the MSAN Institute for educators each spring, the annual MSAN Student Conference in the fall and often a mini-conference in early winter.

It was the 2013 MSAN mini-conference that spurred Stewart to reach out to Yorktown’s underrepresented students. Out of a total student population of 1,800, only 5.7 percent are black and 15.7 percent are Hispanic. 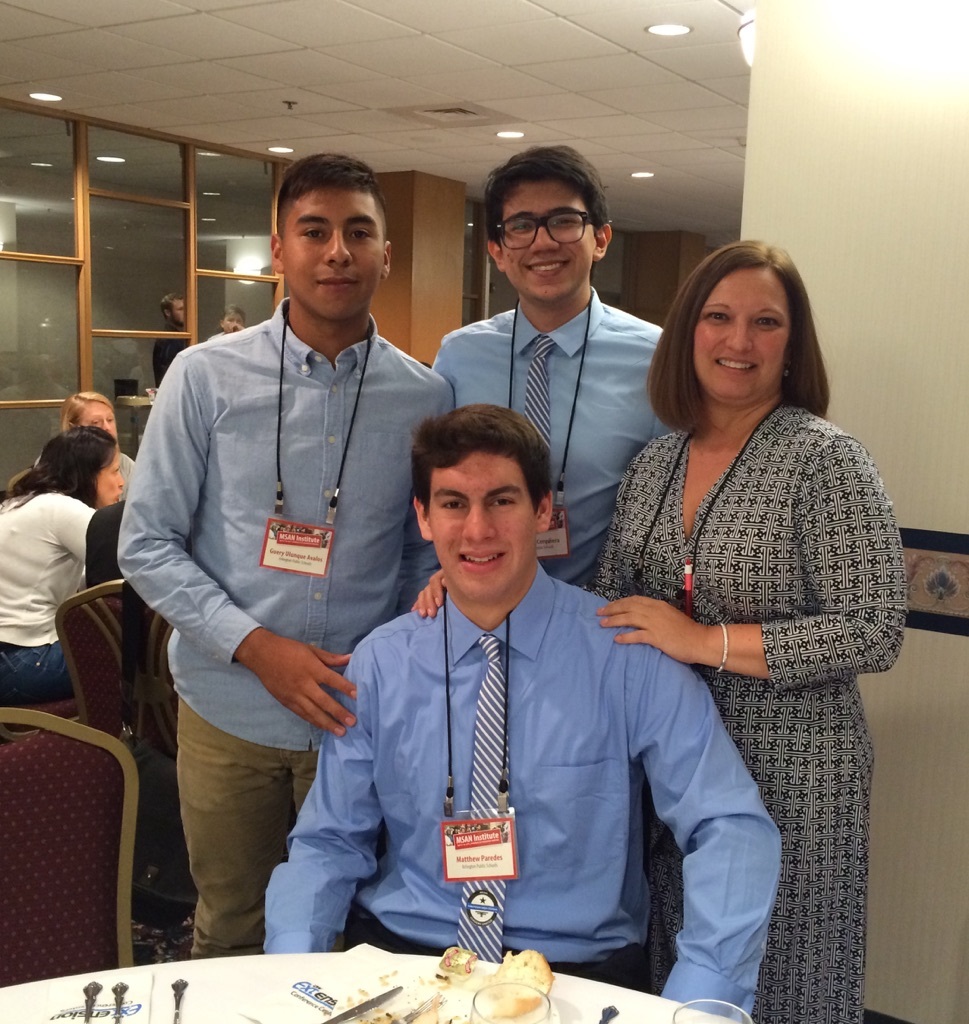 “We’ve been sending adults and kids to MSAN events for 11 years, and we finally decided to act on what we learned.” Stewart and her teaching partner, Tracy Maguire, got to work, and within a very short time created the MSAN program for male students of color. “We concentrated our efforts on boys because there are so few minority boys at our school, and we were concerned about losing them in the system.”

With the buy-in from school administrators, Stewart started holding monthly MSAN meetings during the school day—an unusual arrangement, but she says it was the only way to ensure high attendance. These 45-minute meetings usually draw between 100 and 170 minority students, from freshmen to seniors, and mostly blacks and Latinos.

“The first meeting was extremely powerful. We have so few minority students, that they are spread out among classes. So to have all our black and Latino boys in the same room at the same time was amazing. They’re looking around and thinking, ‘Ah, there’s more of us than we thought,’” says Stewart.

Each meeting features a guest speaker—a high-achieving minority male from the community who can serve as a positive role model for the boys—or a team-building activity such as making meals for the homeless. “For instance, a manager from Men’s Wearhouse came and taught the boys how to tie a tie and dress professionally. And we had an Army officer from the Pentagon, who was both black and Latino, talk about how he persevered through setbacks in his life.”

That particular guest speaker really resonated with Ulunque. “I could relate to him because when he came to the U.S., he didn’t know English either, and taught himself how to speak it, just like me.”

One of MSAN’s core principles is to always seek out students’ voices, like Ulunque’s, to inform the organization’s direction, says Madeline Hafner, MSAN’s executive director. “The MSAN Institute allows us to share the promising practices in equity leadership from one district to others.”

She believes these two-day interactive opportunities make a profound impact in schools over time. “What makes our spring conference so unique is that you walk away with personal contacts and real, practical strategies for implementing change in your district.”

According to John Diamond, change is desperately needed in our nation’s K-12 school systems. The Hoefs-Bascom Professor of Education in Educational Leadership & Policy Analysis at UW─Madison—and an MSAN Institute keynote speaker this year—says much work still needs to be done on racial inequality and educational access. “Oftentimes in an integrated school, black and Latino kids get access to the least rigorous classrooms and the least experienced teachers; and the white kids get opportunities to be in more rigorous classrooms with more experienced teachers.” 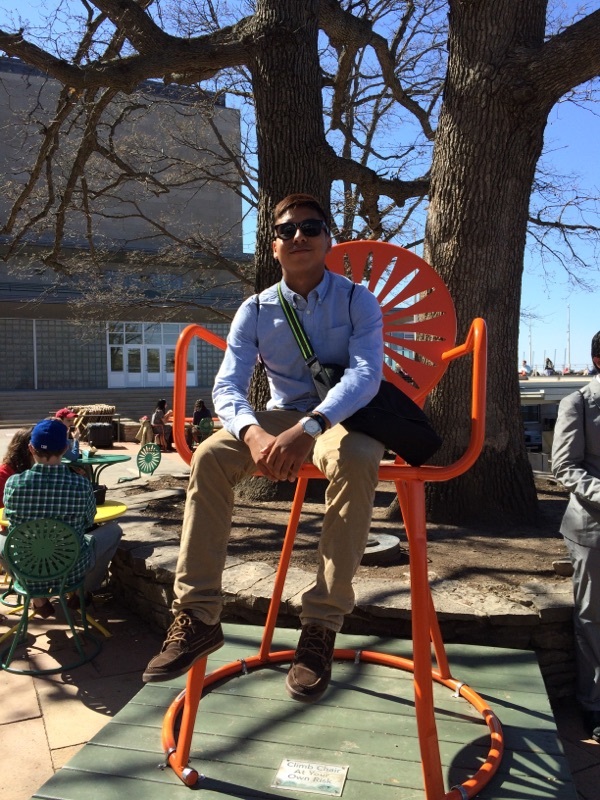 Guery Ulunque takes a break in the iconic terrace chair during his first-ever visit to Wisconsin for the 2015 MSAN Institute.

Diamond says that until these issues are addressed, schools will likely not see big gains in reducing inequality. However, he believes that MSAN has done an admirable job in advancing the cause. “MSAN serves as a great model of bringing people together to reflect on what has been learned, see possibilities and build relationships that will lead to positive student outcomes.”

Yorktown’s MSAN program operates on endless goodwill and volunteer efforts. “We don’t get any funding from the school district,” says Stewart. But she did pull together enough donations and funds from bake sales and a car wash to buy all the boys a tie. “When they wear their ties, it sets them apart in a positive way. They feel as special as the athletes who dress up for a game—and it gives them more clout in school, which has been important for their self-esteem.”

The MSAN program has changed Ulunque’s life. He met his core group of friends there and it has pushed him to excel academically. “When I was a freshman, my grades weren’t so great. Then I found out that if I wanted to be an MSAN student leader, I needed to have a 3.0 GPA or higher, so I have been working really hard to get my grades up,” he explains.

The good news is, Ulunque will graduate this June with that prized and hard-fought 3.0 GPA. Unfortunately, it’s a little too late for the graduating senior to parlay it into an MSAN leadership role. “That’s OK,” he admits. “MSAN helped me get through high school and get me to where I am right now.” A soccer, wrestling and track athlete, Ulunque has set a new goal for himself—he plans to become a sports physical therapist and will attend a junior college in Washington, D.C., in the fall.