More than 100 faculty, staff and students gathered Feb. 1 in the Education Building to hear a presentation of the study.

New student-led research at UW−Madison is providing the first detailed glimpse into the Hmong American undergraduate experience on campus, giving voice in their own words to the hopes and concerns of enrolled members of the state’s largest Asian American population.

“A big part of why we wanted to do this study has to do with its potential to provide powerful insights from minority communities whose voices are often not included on debates and discussions of higher education issues,” says Bailey Smolarek, an associate researcher at the Wisconsin Center for Education Research within the School of Education. She helped mentor the seven Hmong American undergraduates who interviewed 27 of their ethnic peers for the study, all but four of them born in this country.

In part, what the six-month study reveals is disconnect between Hmong American students – or Hmoob* American, in the traditional spelling—and the university that aims to educate them within a framework that respects the values of diversity and inclusion. It also includes six recommendations to help improve the relationship.

Too often, the study participants say, the university’s stated goals do not match the students’ lived reality. Especially in some signature campus locations – including State Street, Langdon Street, student dormitories and even classrooms in Grainger Hall and other academic buildings – participants say they are stared at, asked to speak their native language as a kind of novelty, or otherwise marginalized in ways that alienate them from the larger college community.

“I lived in Sellery (residence hall) freshman year and it was…,” said one study participant, a senior named Lee, and then sighed. “I just felt like I didn’t really fit in. For example, I introduced myself to my neighbors, and they would talk really slow to me, like, ‘Hel-lo. It’s really nice to meet you,’ in a slow tone. I just felt like, ‘I was born here; why are you acting like this to me?’”

One of the key things students told researchers is that they experience “spaces of belonging and spaces of exclusion,” adds Matthew Wolfgram, senior researcher and assistant director of WCER’s Center for Research on College-Workforce Transitions (CCWT), the study sponsor.

“Hmong American students don’t experience the same campus map as others,” says Wolfgram, who also mentored the student researchers. “Where most students would walk around freely and feel comfortable and have generally positive experiences – it’s sometimes referred to as the ‘Badger Experience’ – Hmong American students in those same places do not feel like they belong there.”

Clear-cut affronts such as the vandalizing of a multicultural learning center in Witte Hall also were cited as troubling signs by study participants, along with more subtle frustrations, such as resentment over feeling they often are required to educate their teachers and other students about basic aspects of their people’s culture and history.

“A lot of people don’t even know who (Hmong) people are,” says Maria, a freshman who participated in the study.

Study participants want their white peers to understand, for example, that they are more than just a function of their place in U.S. Cold War history, when many Hmong soldiers fought with Americans against the Communists during the Vietnam War. Historically stateless and marginalized, the Hmong lived in the mountains of Southeast Asia and China, where they became victims of Communist retaliations when American troops pulled out of the war, helping to drive the number of Hmong refugees to Wisconsin and other states starting in the 1970s.

Between 1990 and 2010, the Hmong population in Wisconsin grew from 16,000 to 47,000. Census data show the Wisconsin Hmong population also is relatively young – 43 percent under age 18 compared to 23 percent statewide – and still has comparatively low educational attainment rates despite recent gains: in 2010, 38 percent of Hmong who were 25 or older didn’t have a high school degree, compared with 11 percent of Wisconsin’s total population.

Based in part on interviews and observations of the study participants, the CCWT study examined a series of cultural and institutional factors that researchers say have led to a sense of exclusion and “institutional invisibility” for Hmong American undergraduates at UW−Madison seen by some as an echo of their historical trauma, displacement, assimilation and resilience.

“That issue of invisibility, of feeling invisible on this campus, came up again and again in the interviews and our research team discussions,” Wolfgram says. 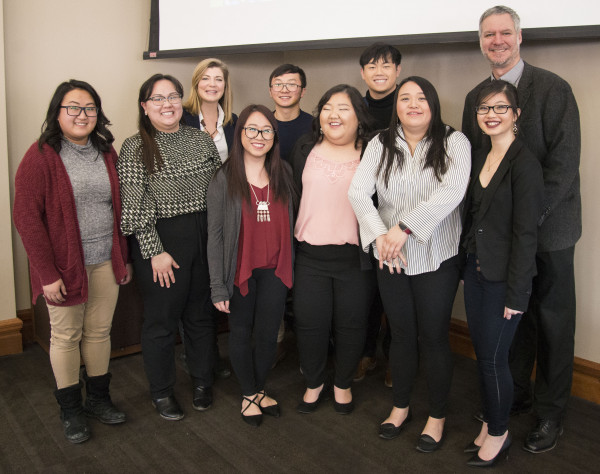 Done in partnership with members of a campus-based student initiative known as the HMoob American Studies Committee (HMASC), the study used a collaborative approach known as Community-Based Participatory Action Research (CBPAR), in which researchers team with representatives of the group they’re studying for a more grounded understanding of the topic.

That meant the student members of the research team were involved in every aspect of the study, their mentors note, from the initial reading of relevant literature to drafting the study protocols and questions to doing interviews, making observations and coding all the data.

“It’s nice to put all the pieces together and just try to analyze, what did we actually find, from all the responses,” says student researcher Pa Kou Xiong. “It was really important to do it.”

The student researchers also were key to recruiting a diverse mix of study participants among their fellow Hmong American students with differing interests, ages and backgrounds – something they could do more easily and organically than Wolfgram and Smolarek.

“They were able to access their own networks on campus to do recruiting,” Wolfgram says.

To counter the identified problem of perceived invisibility, one of the study’s main recommendations is for UW-Madison to publicly disaggregate the number of Hmong American students in its annual Data Digest and other publications. The university now groups Hmong Americans under the sub-category of Southeast Asian, along with Vietnamese, Lao and Cambodian American students, and publicly within the larger race/ethnicity category of Asian.

Doing that and adopting several other profile-raising changes suggested in the study – such as recruiting more Hmong American students in the state, funding a new tenure-track faculty hire focused on Hmong and Hmong American studies, and employing academic and career advisors with backgrounds in Hmong history and culture —may help the university better provide Hmong American students with the educational programs and services they need, and perhaps ensure that unwelcoming attitudes are less likely to stymie their career and academic goals.

Hmong American students also would like to see a dedicated space on campus where they could meet with professors and advisors and explore career development resources.

“We have the social component,” student-researcher Lena Lee says. “We want more of the academic component.”

Since 2006, Hmong American students have been able to voluntarily self-identify their ethnicity for admissions officials, with an annual enrollment average of 294 students from 2007-2018, including a 22 percent decline since 2013, according to the researchers’ analysis of the records. Other demographic findings about UW-Madison Hmong American students show that:

On the positive side, study participants reported feeling most welcome in campus spaces specifically affiliated with students of color and in ethnic-specific spaces, such as the Multicultural Student Center in the Red Gym and student organizations such as the Hmong American Student Association, and in various student-support programs.

That doesn’t mean the participants report a desire to necessarily segregate themselves from students of other races and ethnicities. They understand one of the aims of higher education is to interact and learn from people who may be different from them, Wolfgram and Smolarek say.

“The students all expressed a desire for the entire campus to feel like a welcoming, belonging and safe place,” Smolarek says. “But for that to happen requires effort by everyone here.”

The study’s sample group, while small – representing about 10 percent of the Hmong American student body – reported these unwelcoming experiences and sentiments unanimously.

“The ubiquity of this finding in our sample tends to lend credence to the study’s findings,” Wolfgram says.

Next steps to include campus outreach, more research

The student researchers presented their findings publicly for the first time on Feb. 1, to more than 100 people gathered for a noon-hour presentation in the Education Building. In attendance were other Hmong American students, but also many faculty members and staff from the School of Education, the School of Human Ecology and student support professionals.

That response was heartening, the student researchers said, as were the contacts they’ve received since the presentation, such as from support staff from areas identified as unwelcoming in the study – asking them how they can help make Hmong American students feel more comfortable.

They also heard from two Wisconsin state legislators seeking ways to partner on solutions, and from several minority students of other races and ethnicities who reached out to say they empathized. “They said, ‘We feel you,’” Lee says of those students.

Going forward, the research team plans to meet with campus officials on possible solutions. The team also may explore future research topics, such as documenting the experiences of recent Hmong American graduates in transitioning to the workforce, and developing curriculum to help better educate the campus about Hmong people, culture and history.

*It is important to note that while many spell this ethnicity as “Hmong,” the group conducting this research spells it - capital H, capital M, -oob (“HMoob”) in order to follow the Hmoob Roman Popular Alphabet and be inclusive of the subgroups that spell this ethnicity with an “H” or “M” (e.g. Hmong Der, Mong Leng).

About CCWT: The mission of the Center for Research on College-Workforce Transitions is to conduct and support research, critical policy analysis, and public dialogue on student experiences with the transition from college to the workforce in order to inform policies, programs and practices that promote academic and career success for all learners.

About WCER: The mission of the Wisconsin Center for Education Research is to improve educational outcomes for diverse student populations, impact education practice positively and foster collaborations among academic disciplines and practitioners. It is one of the first and most productive education research centers in the world, helping scholars and practitioners develop, submit, conduct and share grant-funded education research for more than 50 years.